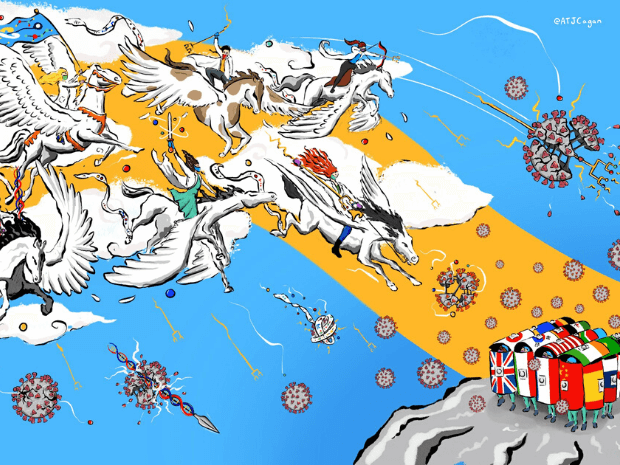 Ways to Support Research Against COVID-19 from Home

We have compiled a list of ongoing COVID-19 research projects. Supporting research is one of the many ways in which you can help out during these challenging times. Some of these research programmes are open to anyone, while others are open only to people who have been directly affected by the virus.

We are collaborating with 100+ researchers around the world to build a biobank of genetic data, which will act as a vital resource to help scientists understand more about the virus.

If you already have DNA data, you can help researchers at the Medical Research Council develop new ways of analysing genetic data by uploading your existing genetic information.

This medical research study aims to improve the way scientists predict your traits (phenotypes) from your genetic information (genotype), as well as discover more about the relationship between genetics and COVID-19 severity.

Led by Professor Tim Spector, professor of genetic epidemiology at King’s, TwinsUK is a scientific study of 15,000 identical and non-identical twins, which has been running for nearly three decades. Most already have taken part in comprehensive genetic analysis and immune profiling, as well as detailed gut microbiome profiling. At least 5,000 members of the existing twin cohort and their families are expected to sign up for this new study.

The free monitoring app has been developed as a partnership between researchers at King’s College London and health data science company ZOE. The app has been made open to the general public and more than 750,000 people have joined so far.

The website states that: Your data is protected by the European Union's "General Data Protection Regulation" (GDPR). It will only be used for health research and will not be used for commercial purposes.

This project has a dual aim of crowdsourcing information from the public about potential COVID-19 infection, and developing an open standard (shared structure and set of questions) for collecting this kind of information across all studies.

You can see the aggregated results from more than 4,000 participants in a number of charts in real-time through the website.

The privacy policy states that: Your personal identifiable information will NEVER be shared, sold or passed onto anyone else without your explicit permission. The COV-CLEAR case tracker has been launched with the sole purpose to help our countries' public health authorities, governments and researchers see what is happening based on all our self-reported cases in real-time.

This is a grassroots research project run by volunteers from across Europe. Like COV-Clear, they are working on both collecting data and developing open standards to be used worldwide. Corotrac allows you to report your symptoms anonymously alongside your age, sex, and approximate location. Rather than understanding individual-level response, this project is designed to allow governments to evaluate the bigger picture and track the spread of the virus.

The data sharing policies are very clear, and written on the website in plain english. No personal information is collected or required.

Your resting heart rate starts to rise before you become sick with a viral infection. This team led by Dr Eric Topol previously showed they could detect flu outbreaks by analysing smart watch data (fit bits, apple watches, etc.). They have launched a study to detect COVID-19 outbreaks, and anyone with a smart watch can download the app to participate.

Not yet open to join online.

A community effort to identify genetic variants associated with COVID-19 susceptibility and severity. This research programme, based out of Finland, will be DNA testing people who have been infected by the virus in order to better understand how human genetics influences severity of symptoms, or recovery from infection.

AncestryDNA, 23andMe, and MyHeritage have a combined total of over 15 million consumers’ genetic information in their database. All of these companies allow customers to download their raw data and there are hundreds of companies offering to re-analyse your data to give you even more information about your health or ancestry.