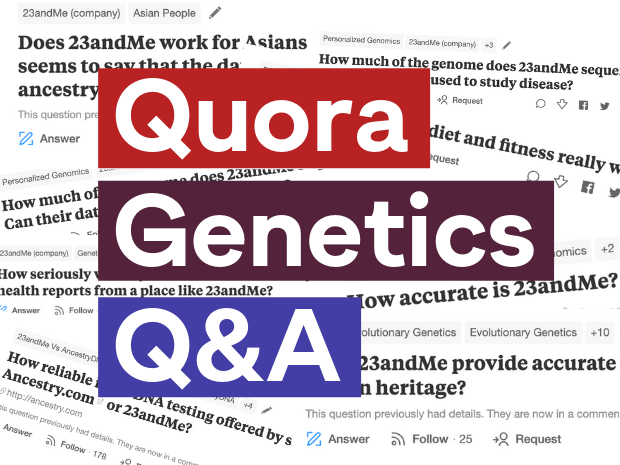 Last week, we decided to do something a little bit different. As part of our mission, we aim to bust the top myths to do with genetic testing and help educate the world about how our DNA could change healthcare for the better. So to kick it all off, we thought we’d answer your top queries about genetic testing and where better to find great questions than on Quora ; a website built completely for asking questions and sharing knowledge.

Last week, we decided to do something a little bit different. As part of our mission, we aim to bust the top myths to do with genetic testing and help educate the world about how our DNA could change healthcare for the better. So to kick it all off, we thought we’d answer your top queries about genetic testing and where better to find great questions than on Quora ; a website built completely for asking questions and sharing knowledge.

1. How accurate is the DNA testing offered by sites like Ancestry.com or 23andMe?

Patrick breaks this question down into two parts. Firstly, the accuracy of the technology, as both companies use genotyping which looks at 500,000 to 1 million sites across your DNA (out of the 3 billion bases you have). The accuracy of this test is actually very high and it’s very rare that it would make a mistake when reading those sites.

Part two of the question would be how accurate their interpretation of the data is--something which is far less reliable. For instance, if you have your genome sequenced and 23andme interprets your results to give you an overview of your ancestry or ethnicity, this is likely to be entirely different to the results provided by Ancestry DNA, even though they have both been provided with the same data.

Dr Short describes that these kinds of tests can be very accurate when it comes to simple traits like eye colour, hair colour or even male pattern baldness but when it gets more complicated than that, like with ancestry or health-related traits, then the accuracy is far less than you might be led to believe.

2. Does DNA testing for diet and fitness really work?

Unfortunately, the simple answer to this question is no. Following on from the previous question, it’s very possible to reliably sequence your genome but actually interpreting it for anything aside from very simple traits (like how your body processes caffeine or alcohol) is much more difficult. So, with the information we currently have available, it's almost impossible to say whether or not you should be a weightlifter or do crossfit based on your genetics.

We recently met with Dr Giles Yeo, author of Gene Eating, for our podcast episode: A Diet Which Helps You Fit In Your Genes. He explained how the genetics which are underlying obesity, fitness, how we train and what our food preferences are, are simply just not very well understood yet.

Overall, if you’d really like to buy one of these tests to create a tailored fitness regime or diet, we would really recommend that you do plenty of research to make sure that you’re going to get what you want.

3. Does 23andMe work for Asians too? The website seems to say that the data is optimized for European ancestry.

There has been a lot of research and discussion about this over the past few years and the truth is that the results from these tests just don’t translate as well to those who do not have European ancestry. As with all genetic data, it depends on the trait and its complexity but overall, these tests are not as effective for those who are not of European decent.

The reason for this is because historically, the majority of people involved in research studies and those who have previously bought these tests have been of European ancestry (Europeans and people from the US mainly). Therefore, the makers of these tests have built up a solid results base for Europeans and don’t have as much to go by for the rest of the world, so they just cannot make as accurate conclusions from their data.

Patrick urges you to take a look at the accuracy of these tests depending on where you live, to ensure that you receive reliable results. Most of these companies do acknowledge their shortcomings when it comes to genetic testing for those who are not of European decent. In fact, just recently, 23andme announced that they have started offering a ‘diabetes risk predictor’ but said in their press-release that it is not reliable for people who do not have European ancestry.

This topic is something that researchers are actively working on, but at the moment, you might be disappointed if you do one of these tests and are not from one of the main demographics because you could end up with inaccurate results.

4. How much of the genome does 23andMe sequence? Can their data be used to study disease?.

The genotyping kits that these kinds of companies use target between half a million and a million spots on the genome out of the total 3 billion we have. They miss out a lot of information because they only focus on the areas where humans tend to be different from one another. Because of this, they often miss a lot of the rare or personal variation we have.

There are some algorithms that researchers and companies use to try to ‘fill in the blanks’ between these spaces that are tested, but they’re not always accurate, especially on things that are very rare.

Somewhere in between these two tests, there’s also exome sequencing. About 2% of our DNA, so roughly 50/60 million bases, are genes which contain code to make proteins. In this sense, they’re the most important part of your genome. It’s often the case that serious illnesses such as Muscular Dystrophy, Cystic Fibrosis and even breast cancer are caused by mutations in your genes. Exome sequencing focuses in on this 2% so you’re able to see both common and rare genetic variations. The price of exome sequencing also falls between the price of genotyping and whole genome sequencing, so it’s likely to cost somewhere between £150 to £400.

5. How seriously would you take the DNA ancestry and health reports from a place like 23andMe?

In most cases, Patrick says that these tests are just not ready to be diagnosing or suggesting treatments for any major health conditions. If you’re looking into one of these tests for health reasons, he recommends that you speak to a doctor first.

On the other hand, if you’ve already taken a test and received concerning results (like a higher risk of Alzheimer’s or breast cancer) then you should definitely speak to a medical professional. Unfortunately, in most cases, your doctor is likely to tell you that they can’t use this test to diagnose or treat the disorder but they’ll be able to order you another test that’s been through more rigorous approval from the medical system.

Overall, it’s best to set your expectations before you take one of these tests. Make sure you’re aware of what they can and can’t provide you with accurate results for. Genotyping can be extremely accurate when describing eye colour, hair colour and how your body processes alcohol or caffeine but if you’re really worried about a genetic condition then it’s best to speak to your doctor.

DNA Testing: the Good, the Bad and the Ugly

How Direct to Consumer Genetics is Changing