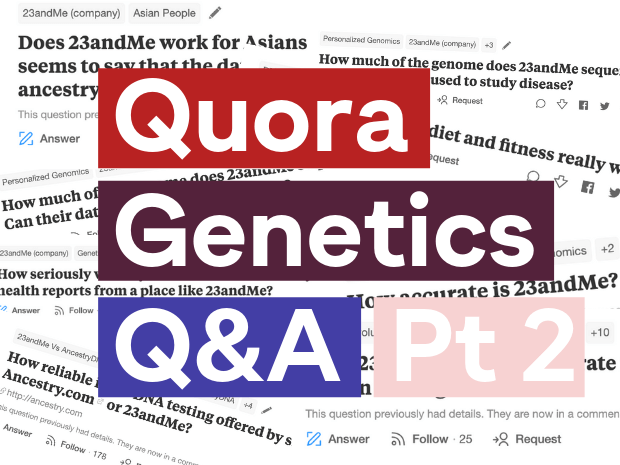 A couple of weeks ago, we decided to do something a little bit different. As part of our mission, we aim to bust the top myths to do with genetic testing and help educate the world about how our DNA could change healthcare for the better. To kick it all off, we answered your top queries about genetic testing from Quora.com.

This week, we found the top questions on DNA and human evolution and asked our CEO, Dr Patrick Short, to give us his answer for each.

A couple of weeks ago, we decided to do something a little bit different. As part of our mission, we aim to bust the top myths to do with genetic testing and help educate the world about how our DNA could change healthcare for the better. To kick it all off, we answered your top queries about genetic testing from Quora.com.

This week, we found the top questions on DNA and human evolution and asked our CEO, Dr Patrick Short, to give us his answer for each.

1. Humans and bananas share 50% of their DNA. What does this common DNA do?

This is a common misconception; it’s actually not true that we share 50% of our DNA with fruit. What the 50% refers to is actually the similarities in genes that humans and bananas share and only about 2% of our DNA is made up of genes, which code for proteins. About 10-20% of DNA is called regulatory elements. These parts of the genome actually control how genes are switched on or off. Finally, the last 80-90% of DNA we have, is unlikely to code for anything at all. Overall, most of the DNA between humans and bananas is very different. Though if you just look at the 2% that are genes, there’s actually a pretty high degree of similarity between them; and that’s roughly 50%.

You may have also heard that humans share 99.9% of DNA with one another and this one is actually true. If you cross compared two people, they’d probably only be different in about 1 in every 1000 bases. The only bit of mis-truth to this is that we also have some larger scale differences. So, one person may be missing a chunk of DNA and another may have an extra bit somewhere else in their genome etc. However, if we look at just single base changes, we are about 99.9% similar to other humans.

2. What are some of the coolest/weirdest genetic mutations?

Patrick has a couple of ideas for this one. Firstly, one that you may not naturally assume is a mutation but developed about 10,000-12,000 years ago, is the ability to drink milk. Like most mammals, originally humans could only drink their mother’s milk. Back then, they certainly couldn’t drink milk from other species but at some point this all changed. Apparently this mutation originated somewhere in Europe and it must have allowed the people of that time to consume more calories and survive better than their lactose intolerant counterparts. Because of this, and Darwin’s theory of natural selection, this mutation swept across the population. However, in other parts of the world, where people may not have european ancestry, there is still an incredibly high percentage of people who are lactose intolerant. Although this may not seem to be that much of a significant adaptation now, if we go back ten to twelve thousand years ago it was a pretty great advantage to have.

Dr Short concludes that his ‘runner up’ for weirdest genetic mutation is probably a mutation which affects your ability to feel pain. Obviously, not being able to feel pain is not always an advantage as you may hurt yourself and not realise, which can make things get a lot more serious very quickly. However, understanding the variations between pain sensitivity in people can really help us to design painkillers and other medication to help people who have chronic pain.

Other noteworthy genetic mutations are synesthesia, where people have senses that overlap for example hearing music and seeing colours while you listen, and a photographic memory (both of which are pretty cool!) These two conditions are also, at least in part, genetic.

3. What are the most interesting examples of natural selection in humans?

The most interesting example of this actually came out about a year ago when a group of scientists were studying the Bajau people of Indonesia. The scientists found that some of these people could actually dive underwater up to 70 meters! People without their incredible adaptation would really start to feel the pressure at these depths, their ears would pop and it probably wouldn't go too well.

The Bajau people can swim to these amazing depths in order to hunt for food, without any kind of scuba gear. The researchers found that there was a genetic difference between the Bajau and others without the abilities they have, which includes being able to withstand higher pressure and being able to hold their breath much longer. The adaptations included a larger spleen, which essentially allows them to store and release oxygen while they're underwater.

There are other awesome examples of human natural selection too like altitude adaptations in nepalese people who live very high in the mountains. However, Patrick’s favourite has got to be the Bajau deep sea divers.

4. How many genetic diseases or syndromes exist?

This question may sound simple but the answer is actually pretty complicated. However, if you ask most genetic scientists, they’ll probably tell you around five to seven thousand and the vast majority of these conditions are individually rare. We had an example of this on our podcast a few episodes ago, when we spoke to Nick Sireau, co-founder of Findacure and chairman of the AKU society. Both of Nick’s sons have Alkaptonuria, a disorder that occurs once in every half a million people. That’s over 100 people in the UK who have this disorder, so although these conditions may be individually rare, there’s actually quite a large proportion of people who do have one.

There are even a few conditions that are really quite common, like cardiovascular disease, diabetes, breast cancer and Alzheimers. While many of these conditions are well known, they’re actually often caused by very different genetic combinations together with the person’s environment. So what that means is that while two people may have depression, which is in part genetic, the way you respond to treatments could be very different because you’ll both have different causes of your depression. The same thing goes for other illnesses, like breast cancer which has dozens of sub-categories.

What one man learned from doing over 300 DNA tests

Craig Macpherson is possibly the most genotyped man in the world. We invited him to join us for the second installment of our podcast, to talk to him about his site: DNA testing choice, and to learn what he discovered from doing over 300 DNA tests.

A diet which helps you fit in your genes

In the third installment of our podcast, CEO Dr Patrick Short discusses diet and genetics with Dr Giles Yeo; author of ‘gene eating’ and researcher at the University of Cambridge, studying the genetics underlying obesity and appetite control.