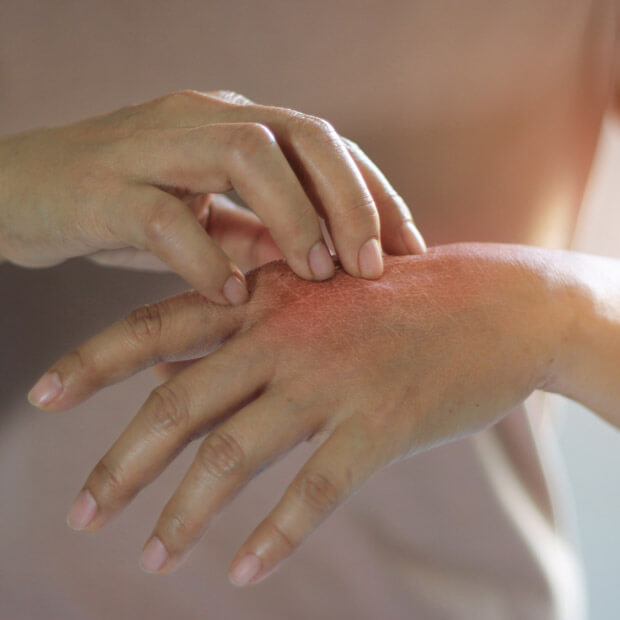 Can genetics help us treat psoriasis and eczema?

Imagine you have an identical twin (or maybe you already do!)...

...if you have a painful skin condition like psoriasis or eczema, what are the odds that your twin also has it? In turns out the odds are very high — if your twin has psoriasis, you are ten times more likely to have it as well. This is because psoriasis (and eczema), like many conditions, have a very strong basis in genetics.

...if you have a painful skin condition like psoriasis or eczema, what are the odds that your twin also has it? In turns out the odds are very high — if your twin has psoriasis, you are ten times more likely to have it as well. This is because psoriasis (and eczema), like many conditions, have a very strong basis in genetics.

For this reason, data from companies like 23andMe or AncestryDNA can be used to predict your risk of psoriasis or eczema based on your DNA. Of course, these predictions are not perfect and conditions in your environment still play a big role.

Using data from a small number of genes, researchers have built mathematical models that can predict psoriasis risk from your DNA alone. These genetic risk scores can even be used to predict the age of psoriasis onset. In one study, the score was able to separate individuals in early onset (age 20 years) from late onset (age 40 years) based on the participants.

Prediction may be interesting, and a powerful testament to the explanatory power of data, but what about treatment or cure? Prediction without action is a very hollow victory.

Luckily, the predictions that come from genetic data are not just a ‘black box’ that accepts data and spits out our genetic fate. Genetic risk scores contain real clues about why these conditions happen in the first place. For example, the genetic predictions for psoriasis and eczema highlight dozens of genes that are involved in the immune system. Psoriasis and eczema are both the result of our body’s own immune system mistaking friendly cells for foreign invaders, so these scores (again, based only on our DNA) may be capturing some powerful truths about the cause of these disorders.

Pharmaceutical companies have begun to recognise this potential and have launched efforts to mine vast amounts of genetic data in order to better understand the root cause of common genetic disorders. A huge alliance of companies including GSK, AstraZeneca, and Regeneron are pooling resources to sequence the DNA of more than 500,000 people in the UK. GSK has also invested heavily in the genetic testing company 23andMe, although some have voiced concern about how well informed 23andMe customers were of the data sharing arrangements.

Once these companies have identified the key genes involved in disease risk, they hope to design drugs to alter how these genes function and alleviate the symptoms of the disorder. This approach has already led to successful treatments in other disorders, perhaps most famously a cholesterol lowering drug that resulted from finding individuals with naturally low cholesterol due to their genetics. The more data there is to feed to these algorithms, the more potential targets scientists can discover.

Our site allows users of 23andMe, AncestryDNA, and other genetic testing sites to share their data to allow it to be used more widely for genetic research. Users still maintain complete control of their genetic data but it means by choosing to participate in genetic studies, we can accelerate research into all kinds of conditions.

Our logic is: the more ‘smart eyeballs’ we can point at the problem, the better our chances of solving it — but we need your help to make it happen.

Join hundreds of people who are helping to accelerate medical research into skin conditions, such as eczema and psoriasis, by choosing to sign up to our registry. Click below to find out more about our current skin study.

Now aged 20, Jennifer has been living with Eczema since childhood. This is what she has learnt along the way.

How I learned to live with my psoriasis

Diagnosed in his late twenties, this is Chris’s journey with psoriasis.

Why it's ok to feel down about my skin

A mum and counselor, Laura talks about what it’s like to live with Eczema all her life.

How Eczema stops me from doing the things I love

A 25 year old from Indiana, Rachel shares with us how eczema has affected her everyday life.

Me & my psoriasis: An anonymous story

Eczema and Psoriasis : an anonymous story

Skin conditions can be tough to deal with. This is one story of a lifetime of battling eczema, and psoriasis and misdiagnosis.

Hear from three people sharing their stories of how Eczema has affected their work life, relationships and self-confidence.

Psoriasis in your twenties: an anonymous story

A 21 year old from Germany tells us what it’s like to have psoriasis in his teens and twenties...